The second round of the AMX e-Sports Championship, a sim racing competition co-hosted by Automanix (CEO John Lee) and the afreeca Colosseum (CEO Chae Jung-won), ended successfully once again with enough drama to go around.

The second round of the AMX eSports Championship, in which 20 influencers participated, was held at the Daytona International Speedway located in the United States. In particular, the BMW G82 M4 GT3, which was used during the second round, is a new vehicle introduced on iRacing earlier than the actual launch of the real vehicle, and actively used for the AMX eSports Championship.

In the main race, which lasted for 30 minutes in the rolling start method, major accidents occurred one after another in the process of maintaining the ranks. Due to its high speed of more than 260km/h on average and the track characteristics of up to three cars in a corner, dramatic scenes that could be seen in the 500 NASCAR and Indy series of the U.S. constantly unfolded.

The key to the race all depended on whether the influencers strategically used drafting to reduce air resistance and speed by sticking closely to the car in front. This is because in a drafting situation, which by closely following the car in front, the maximum speed can be 10-15km/h higher than running alone, so the ranking could be reversed at any time. 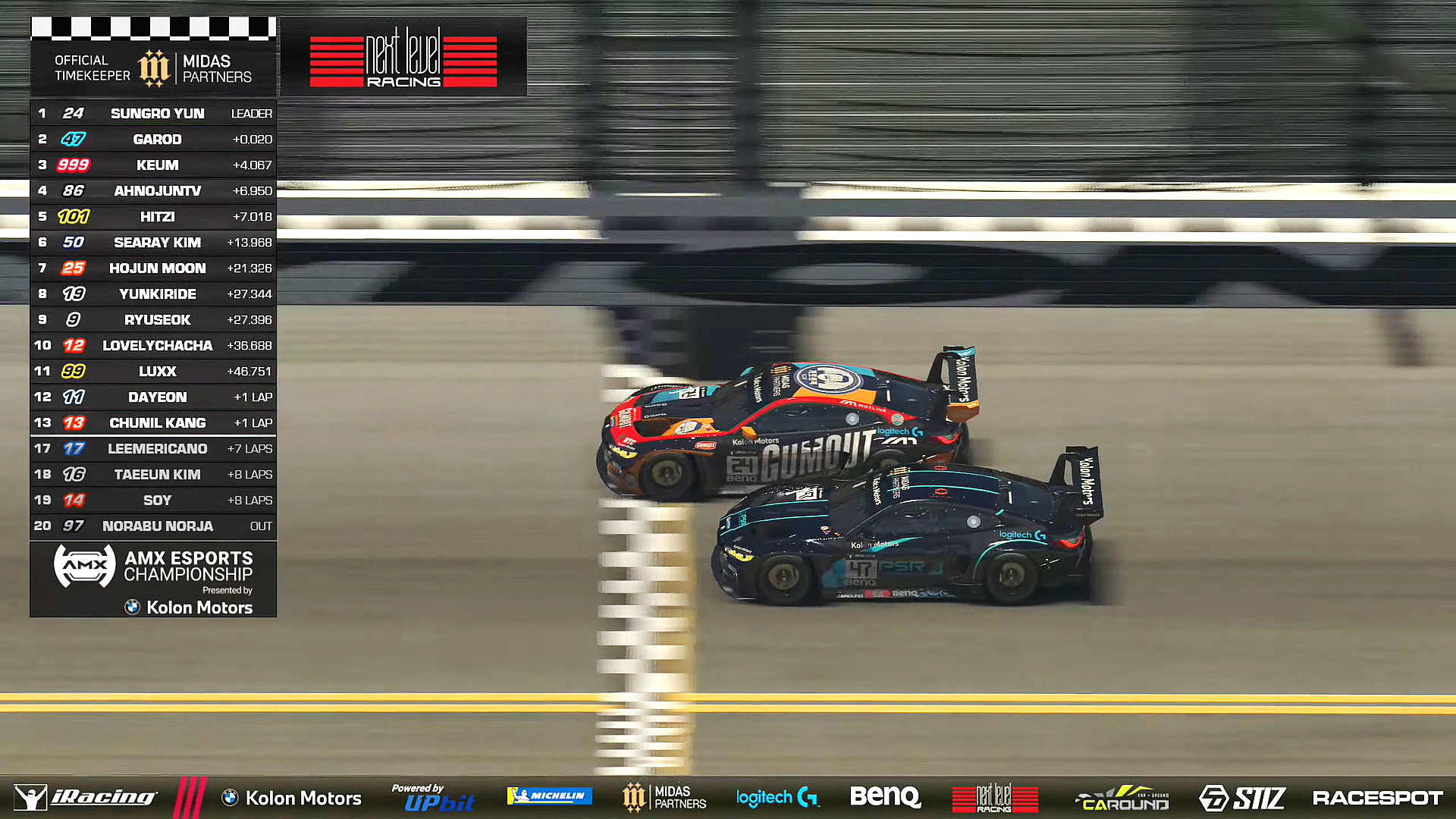 Yoon Sung-ro (Team BTC) won the second round of the AMX e-sports Championship by 0.02 seconds against Shin Woo-seop (PSR).

During the 15-minute sprint race, the ranks were shaken significantly due to the collisions. Starting with the collision of Dayeon (Team PS31) and Desert Eagle (ATLASBX E-RACING TEAM) at the rear, Searay Kim (GRIT MOTORSPORT), Luxx (Midas Racing), and Lovely CHACHA (DCT ERACING) plus others had to give up their lead.

Ryuseok (ATLASBX E-SPORTS TEAM), who had maintained the lead at the start, won the sprint race without losing concentration, and Sungro Yoon (Team BTC), who once climbed to second place, collided with Hojun Moon (Loar Racing) two minutes before the end of the game and was pushed to sixth place. KEUM (Ulsan DR Motorsports) and Yunki Ride (Quadro E-Rain Racing Team), who followed, came in second and third, respectively.

The main race, which lasted for 30 minutes, was restarted due to grid alignment problems during the departure process. Shortly after the restart, as Desert Eagle and TaeEun Kim (2RUN) collided, Ryu Seok, Norabu Norja (Solite Indigo Racing), and JiEun Park (E-uro) were involved in the accident. Changes in the middle and lower ranks have continually repeated due to the collision.

The lead led by Luxx for seven minutes suffered a change in ranking due to backmarker TaeEun  Kim , who did not give up the line. Theplaces of the four drivers in the lead, which were within a second from each other completely changed. Sungro Yoon  regained the lead, but Garod regained the lead in the process of avoiding backmarkers and accidents. However, Sungro Yoon succeeded in overtaking during the last lap and last corner and received the checkered flag first by 0.02 seconds.

Viewers' reaction to the second round was explosive. It was hard to see the all the opinions of the online audiences who commented on the live broadcast a glance. "I've never seen such a fun race on iRacing," "This is what you call a race," and "Best of the bunch, SungRo Yoon" followed by favorable reviews on the series and battles among players. In addition, as in the season opener, all incidents were neatly reviewed thanks to the cooperation between the RaceSpotTV's stewards and KARA.

The AMX e-Sports Championship, the nation's largest sim racing competition being held for the first time this year, is sponsored by various automobile, IT, and clothing companies such as Upbit, Michelin Korea, Logitech G, BenQ, Next Level Racing, Carround, and Stiz.

John Lee, CEO of Automanix, said, "There were some problems in the process, but thanks to the cooperation of all 20 influencers, organizers, and sponsors, we were able to proceed without a hitch. "We will pay more attention to prevent such problems from happening again in the future and make it a competition that satisfies all participants, officials, and viewers.