"The perfect sim racing stadium where 20 drivers can race together.. the grand scale of the rounds and tidy operation of the event altogether overwhelmed the audience"

"DCT's teams had the upper hand throughout the rounds. In the overall points achieved, 1st place went to DCT Racing and 2nd place to DCT E-Racing."

The 4th, 5th, and 6th rounds of the AMX eSports Championship presented by Kolon Motors, co-hosted by Automanix (CEO John Lee) and afreeca Colosseum (CEO Chae Jung-won), was completed for the first time in Korea. The first offline competition made remarkable achievements due to its size, operation, and process of racing.

Round 4 (2 driver team race), Round 5 (3 driver team race), and Round 6 (1 driver race) were hosted as a triple round and in particular on-site. It lasted four and a half hours at the afreeca Colosseum, an e-sports stadium located in Jamsil, Seoul. Meanwhile, 20 teams, which have only faced each other online, gathered together to strengthen their teamwork, and and gave a positive assessment that they could be more immersed in sim racing due to the pressure that comes from facing teams on-site.

The esports stadium was decorated in a variety of ways with sponsors' products with the Kolon AMX e-Sports Championship. Logitech G923 and Astro A20 gaming headsets and the Next Level F-GT were used as racing gears, headsets, and racing gear stands. In particular, the placement of three gaming monitors EX2510S launched by BenQ on June 23 in a row caught the attention of both game participants and online audiences and helped to increase immersion. 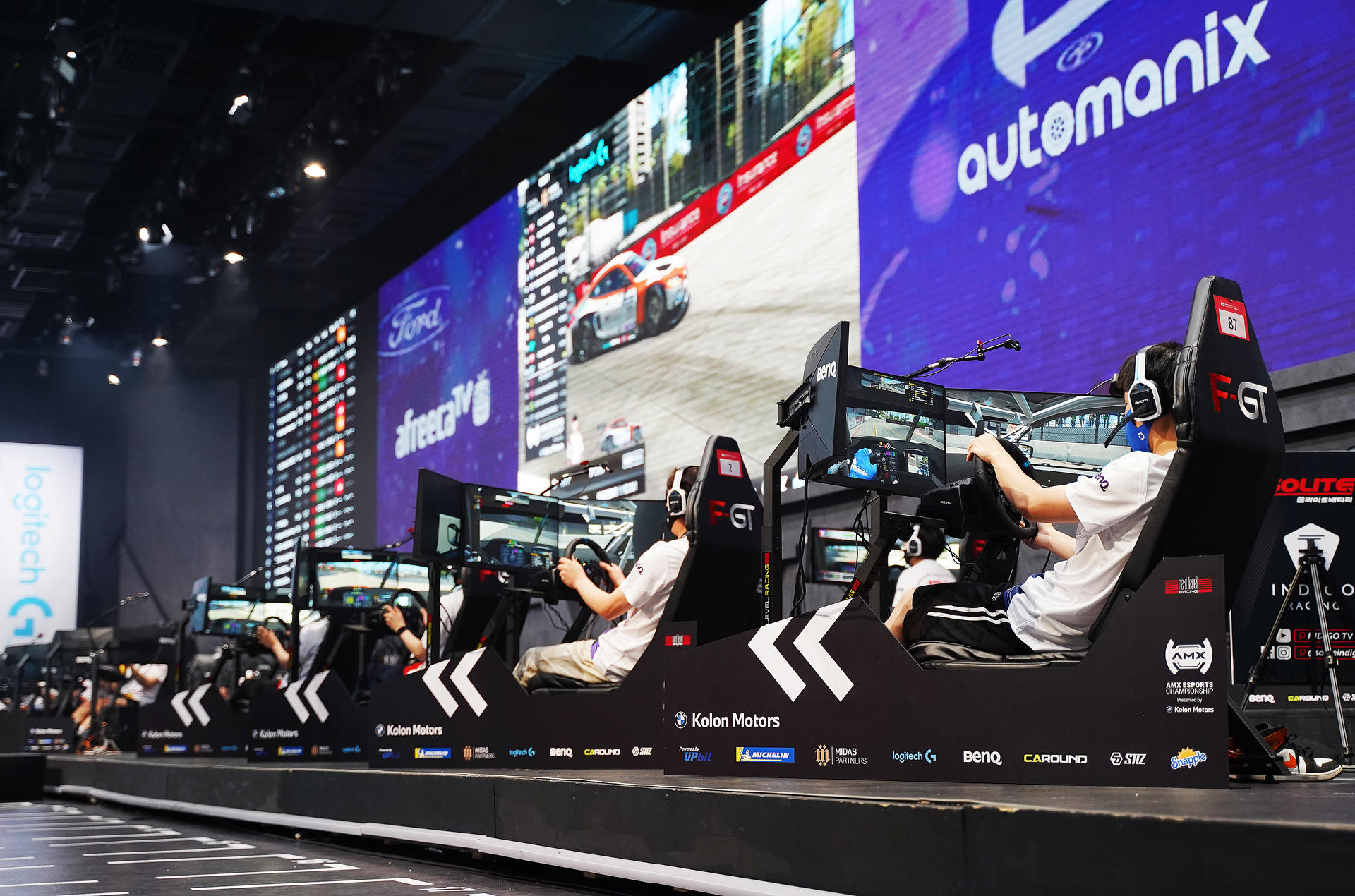 Round 4, which took place on Long Beach, produced a number of unexpected scenes due to the high angled corners  and narrow length of the  circuit. Shortly after the start, DCT's dominant position was formed in the order of DCT Racing, DCT Eracing, and DCT ESports, but HeeJung Ahn's braking mistake pushed him out of the rankings and fell to 16th place due to an accident during his return to the course.

Other than that, DCT Racing was the first to receive the checkered flag, followed by DCT ERacing and E-URO. Meanwhile, BTC and AtlasBX E-sports teams, which started from the 10th and 9th grids, finished fourth and fifth, respectively, while DCT ESports maintained a unique pace after the accident and showed the potential to finish sixth. 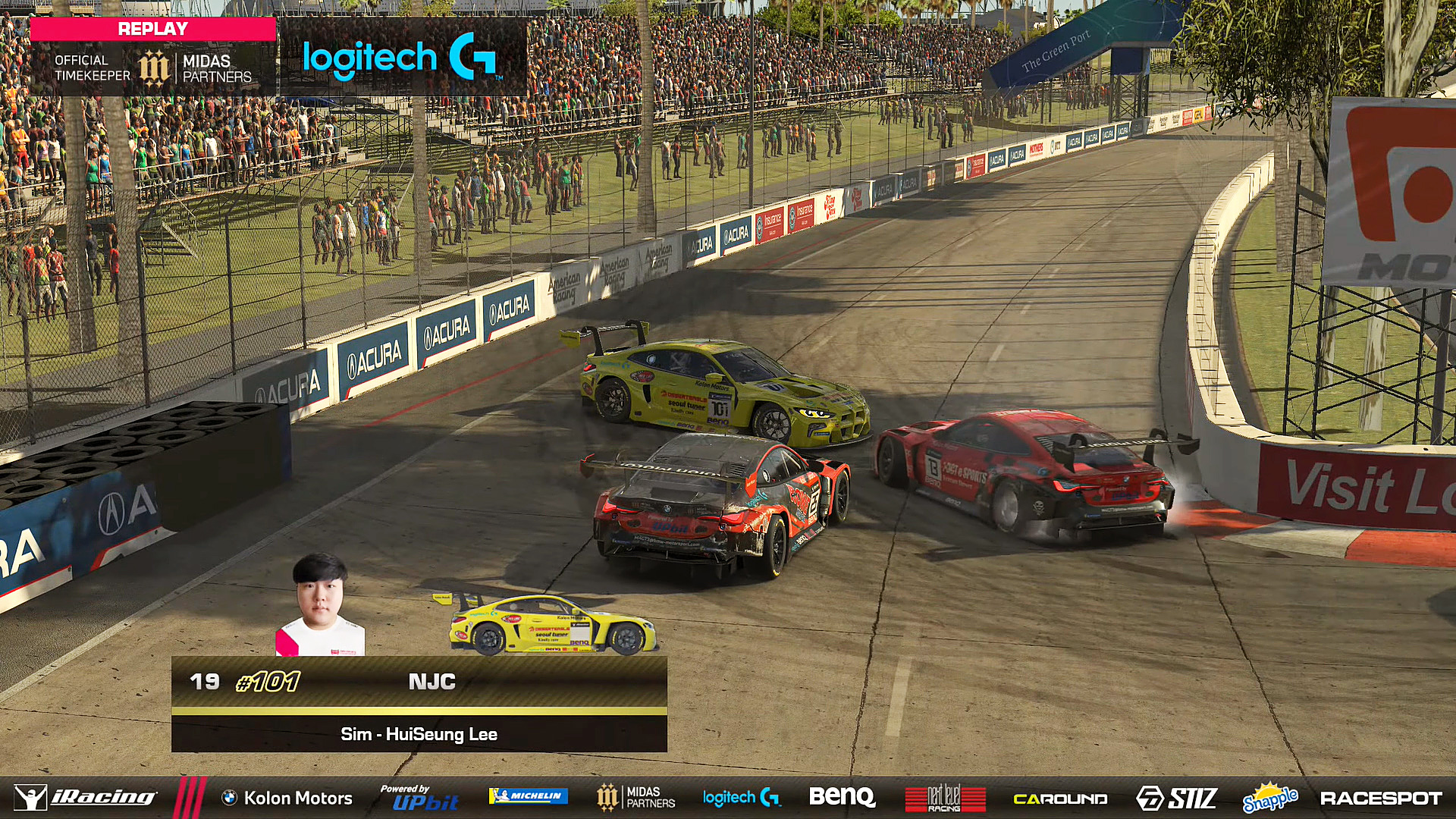 Round 5, which took place at the Indianapolis Motor Speedway, has a wide circuit and gives no choice but to stick together, leading to cause  major accidents.

The 50-minute race began in the order of Loar Racing, Quadro E-Rain Racing Team, and PSR. At the same time as the start, the collision between the first and second places and the NJC collided with the Solite Indigo performance, causing seven consecutive crashes and spins. NJC received a drive through penalty for its responsibility, but did not complete it, thus eventually becoming disqualified from the round for the first time in the tournament.

Different pit-in strategies were implemented due to driver replacement, refueling, and accident repairs, and the rankings changed several times in the process. With 10 minutes left before the end of the game, the AtlasBX eSports team, which avoided major accidents, was the first to receive the checkered flag, maintaining their lead to the end. DCT Racing and DCT ERacing ranked second and third, respectively. 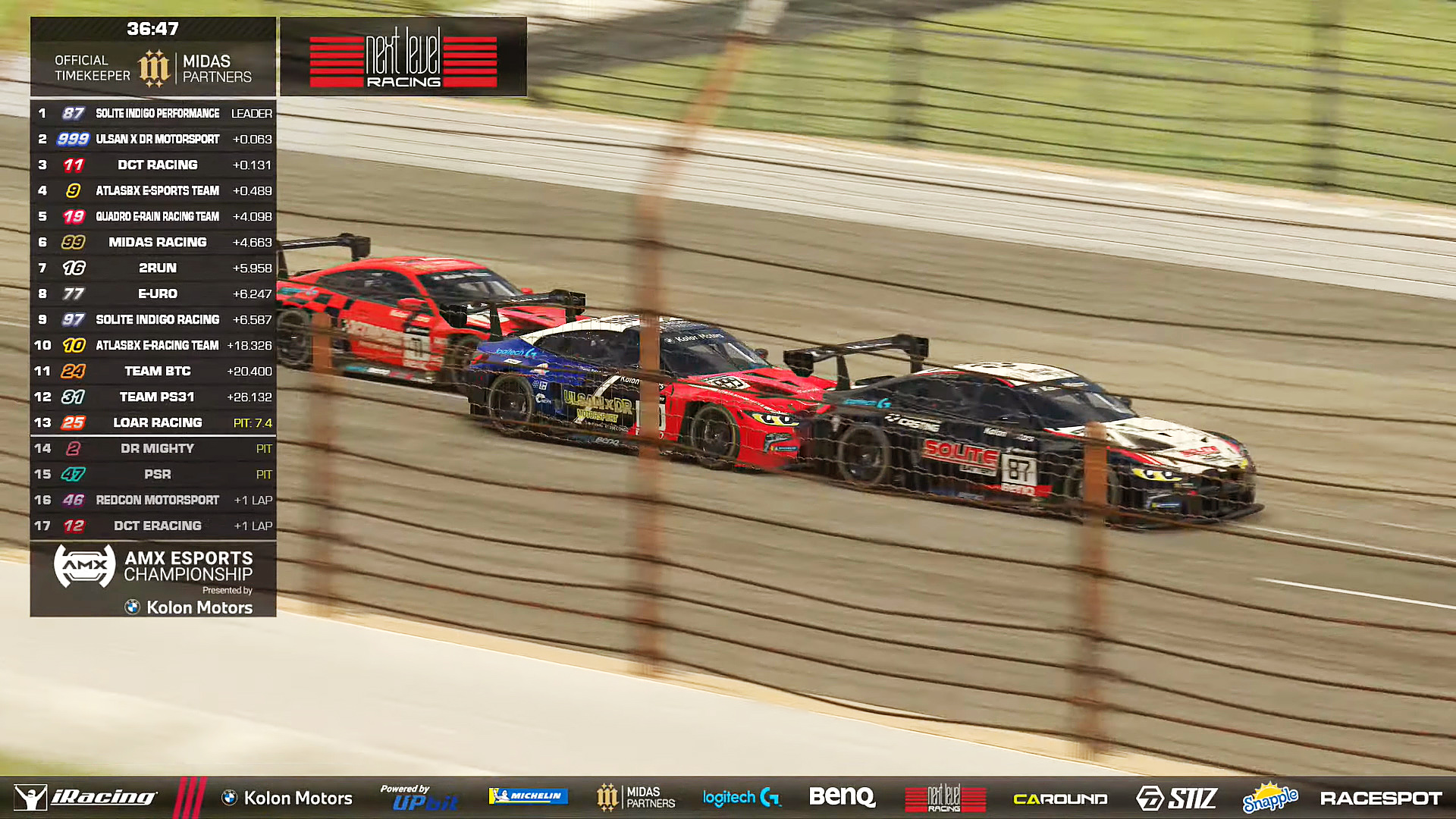 DCT overwhelmed everyone during the sixth round at Spa. DCT Racing, DCT ERacing, and DCT Esports occupied the top qualifiers. However, DCT ESports gave up its position to the Atlas BX ESports team at the same time as the start, and DCT ESports fell to ninth place due to a slight collision in the process of competing with E-URO. After that moment, DCT Racing ranked first, DCT ERacing ranked second, and Atlas BX E-sports team ranked third without much change.

Viewers' reaction to the first offline competition was explosive. "The sheer size of this tournament is unreal!" "I want to watch at the stadium," "It was appropriate stewarding suitable for the sim-racing competition," and "Detailed explanations by commentators further enhance the sense of immersion in the competition." In addition, as in the previous rounds, all incident reviews/protests were completed tidily through close collaboration with the RaceSpotTV and KARA's stewards. 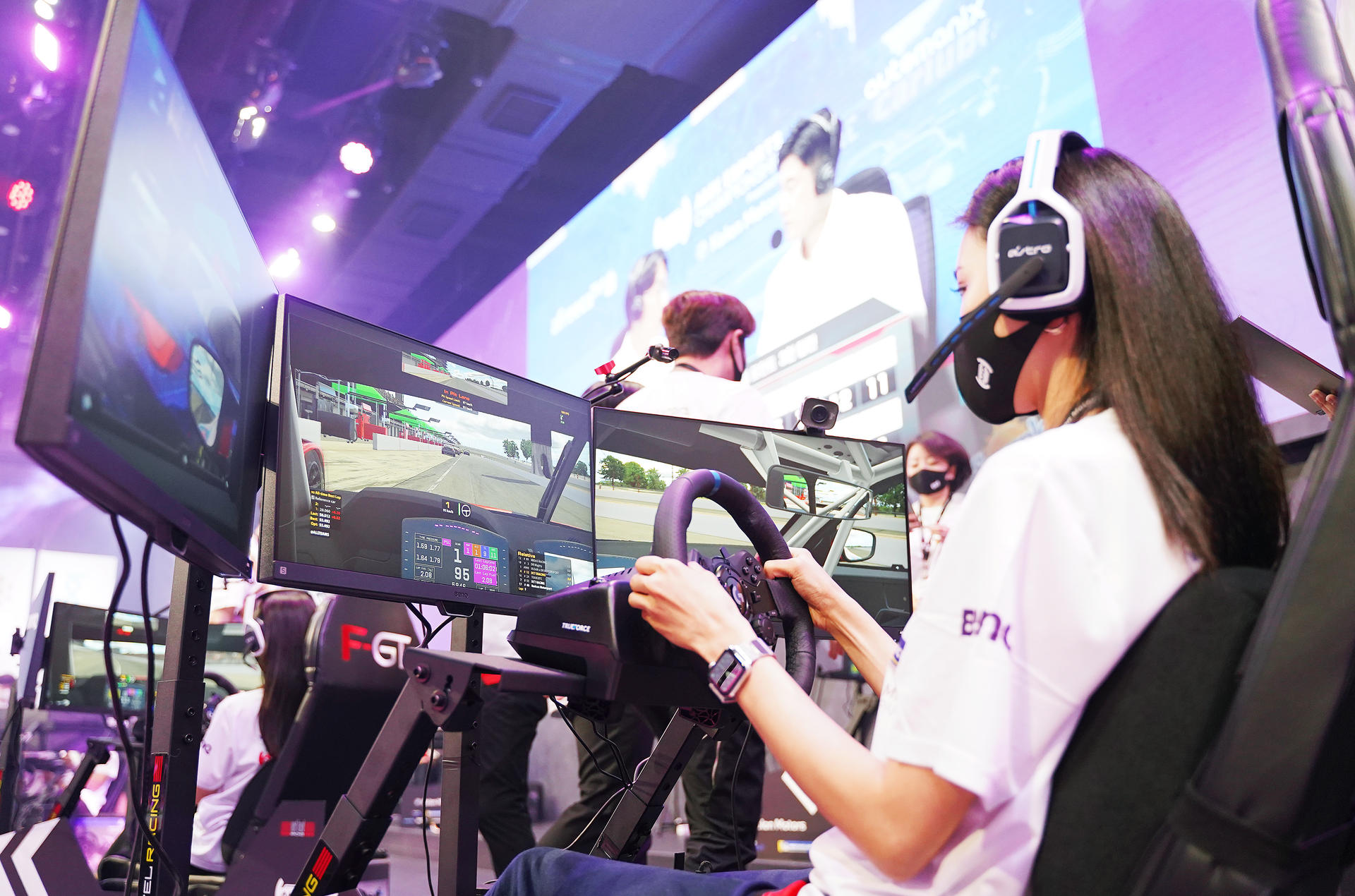 John Lee, CEO of Automanix, said, "We successfully finished the first offline competition of the season, where all employees sacrificed their time in order to plan and operate. I think everything is the result not only them but of the participants and sponsors of the competition coming together. In particular, I feel proud that the public has begun to recognize sim racing and started to pay attention little by little. We will continue to do our best to promote sim racing in Korea."

The AMX eSports Championship presented by Kolon Motors was held without spectators in accordance to the government's social distancing guidelines, and the organizers made every effort to respond to the pandemic situation by thoroughly complying with periodic sanitary work and implementing distancing rules between players.

Team DCT wins Round 7 of the AMX eSports Championship Presented By Kolon Motors Volt Kim, the winner of Round 3 - Held on June 17th, 2021
List